The Old Timers Experiment in Port Alberni was a Huge Success 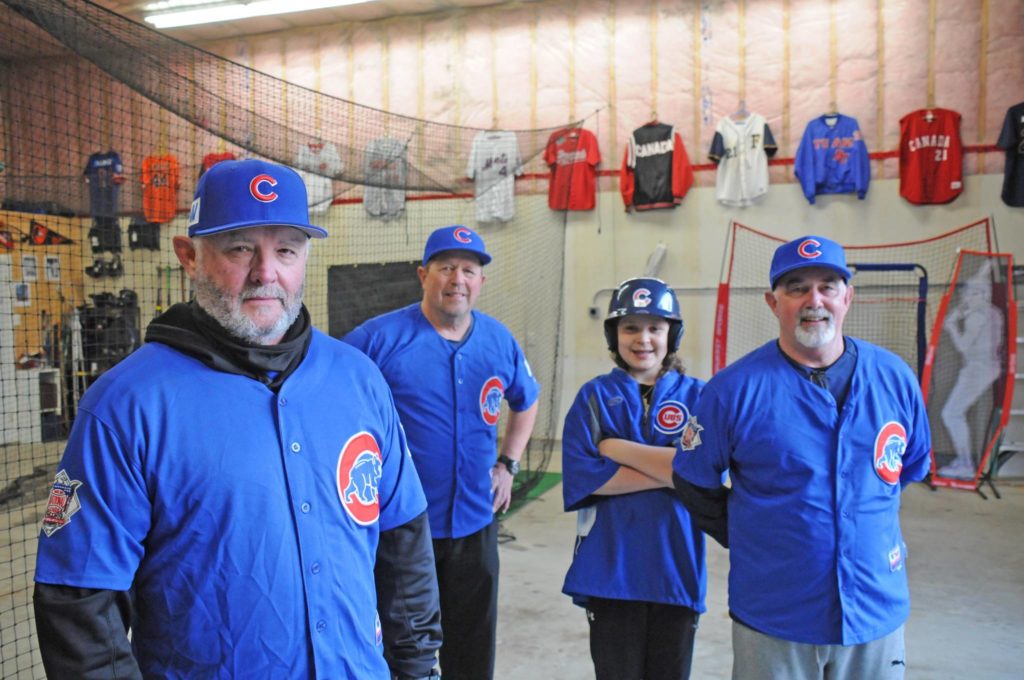 Kelly McGiffin, says "we will definitely go again next year, maybe even have two teams. But its even better than that, there’s been such an interest in baseball (real baseball) back in Port Alberni that we’re trying a Fall League of Open Age Men (anyone 19 or over) and already have about 30 guys signed up with another 15 requesting registration applications. We believe we’ll have three maybe even four teams for this short Fall League (six weeks). Most of these guys are playing “slo-pitch” now and can’t wait to play real ball."

Port Alberni Cubs - Then to Now by Dwayne Stern

Senior men’s baseball in the Alberni Valley can best be described as cyclical. The first cycle began after World War II when the Port Alberni Legion and Port Alberni Young Liberals baseball clubs played in a North Island League and continued into the halcyon days of the 1950’s when the Port Cubs and Alberni Athletics joined the fray, first with the North Island clubs and then joining teams in the mid-Island from Parksville to Duncan. And then baseball was gone. The second cycle began in 1976, when Lon Miles (remember that name) and then Kelly McGiffin (remember that name) in 1979 entered Souther 68ers and Port Alberni Phillies, respectively, into the Mid-Island League. That lasted until the mid-80’s when the league folded and the 68ers and Phillies became the foundation of a Port Alberni city league that bridged the gap until a new city representative, in the form of the Port Alberni Buccaneers graced the diamond at Lon Miles Field (there’s that name again) from the early to mid 1990’s. And then baseball was gone – until 2021.

Enter Kelly McGiffin (there’s that name again) who, after work took him from the Alberni Valley for over four decades, has returned and planted the seeds for what he hopes will become the third, and hopefully, never-ending cycle of senior baseball in the Alberni Valley.

McGiffin’s dream began with the formation of an Over-55 team – the Port Alberni Cubs – that found competition with a like-minded group in the Comox Valley. McGiffin spent a good amount of time working in Comox during his career and has ties to the Over-35 league that has been in operation for a number of years. The two teams played a seven-game series over the course of the summer and will be renewing that partnership next season.

But the Comox-Port Alberni series is only the beginning. The formation of the Cubs has brought together a group of players that has a vast knowledge of baseball on and off the field and connections throughout the baseball community on Vancouver Island. In the future those connections should yield interest in other communities on Vancouver Island and it is hoped that more teams in the Over-55 group will provide more competition and opportunities for these “masters” athletes who can’t get the game of baseball out of their blood.

In conjunction with all of this will be another endeavor hosted by the Cubs – senior men’s fall ball. Beginning in early September, Lon Miles Field (that name again) will play host to the Alberni Valley Senior Men’s Baseball League – Fall Edition. The league is for anyone over the age of 19, with modified rules in place that will make for a challenging, yet fun environment, for all ages (as young as 19 to many in their 60’s, and at least two in their 70’s). Registration has already begun and three days after the league was announced there were 35 players signed up and a large number of others who have requested registration forms. The goal is to have 60 players on four teams and organizers are confident that number will be attained.

The end goal in relation to all of this is to make baseball popular in Port Alberni again. McGiffin and his Port Alberni Cubs team mates hope their efforts will generate enough interest to grow the game at all levels – Over-55, Over-35, Senior Baseball and Minor Baseball.

At the end of the Cubs’ season, McGiffin posted a statement on the team’s Facebook Page that summed up the sentiment of the team and provided a bit of insight as to how the community at large has accepted baseball’s latest cycle in Port Alberni.

“Great game yesterday with Comox winning the game and thus the series 4 games to three.

We want to take the time to thank Comox for their great camaraderie and support through this inaugural year, especially Kevin Dobbelsteyn for his organizing things on their end. What a great group of guys to help us get this going.

We'd also like to thank Vicky Seredick and AV Minor Baseball for all their support and counsel in putting this together and their continued partnership in developing baseball again in Port Alberni, going forward. And of course the crew at the City through Parks and Rec. Very supportive of this post-COVID activity and the future enjoyment of baseball back in the Valley.

Finally, a big shout out and applause for the many supporters (fans - can we call them that?) that came out to watch and encourage us in this endeavor. Some even drove up to Comox yesterday and it was greatly appreciated.

We're hoping to finalize discussions with Minor Ball and Parks this week and then get new information out on the Fall Ball concept. So stay tuned....we've just begun.”